Cinnamon rolls are the best! And cinnamon rolls made without the hassle of yeast are even better. Now what I really should be saying is that “Nothing compares to yeast cinnamon rolls!” and “Anything worth having is worth working hard for!” But let’s face it…I’m lazy. And yeast terrifies me. (Even just saying that word “yeast” sends shivers up my spine and I start imagining a big sticky ball of gunk..) Thankfully though, I’ve been able to turn my yeast-less 2 ingredient dough into these fantastic 2 ingredient cinnamon rolls!

Since I’ve promised to be real with you all, I have to admit, these rolls can be a bit messy…and temperamental if you don’t play your cards right. But that’s why I’m here! The first time I made these the dough was incredibly hard and thick and broke apart every time I tried rolling it. (But I was also using a “broken” rolling pin, so that really didn’t help too much. SIDE NOTE: When wood rolling pins get wet, they expand and won’t roll because the wood soaks up all the water. BUT if you let them sit out and “dry” for a day, they go right back to the way the were. I learned that one the hard way….) But back to the rolls.

Here are a few quick tips for making these bomb cinnamon rolls: 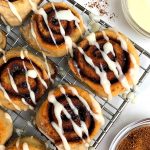 For the Cinnamon Rolls:

*If you don’t have self rising flour then you can make your own! Just combine 1 cup flour + 1 1/2 tsp baking powder + 1/2 tsp salt. **I love using Fage 0% for the greek yogurt. -Non-dairy greek yogurt and non-dairy cream cheese both work for this recipe too!
Previous Post: « Sun Dried Tomato, Artichoke & Feta Frittata
Next Post: Butternut Squash Brownies » And the zucchini craze just keeps on going with th